Writing and production team The Stereotypes––Jonathan Yip, Ray Romulus, Jeremy Reeves and Ray Charles McCullough II––have worked with a range of artists including Omarion, Pitbull and Bruno Mars. The quartet’s most prolific year was 2017, capped off by three Grammy nominations including Producer of the Year.

Romulus launched his music career shortly after he learned to walk. His father was the choir director at his New York City church and encouraged his son to take up the drums. In college he landed a two-year internship with Bad Boy Records and became personal assistant to Jermaine Dupri, which led, ultimately, to an A&R gig with Def Jam. On his first day there, Romulus had a chance meeting with Jonathan Yip of The Stereotypes. When his Def Jam gig ended in 2007, he reached out to Yip and asked if he could join the team. Yip agreed and Romulus broke for Los Angeles. 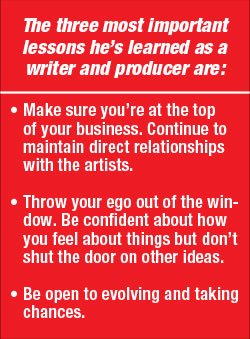 Working as part of a team carries several advantages, not the least of which is creative growth. “To me, it’s everything,” Romulus observes, “because we all have our strengths. I know what my weaknesses are, so it’s great to have other people in the room who can tell me that a sound isn’t [right]. There are things that I probably wouldn’t be thinking of and it’ll completely change the course of what we’re working on.”

Romulus and his fellow Stereotypes find that to evoke an artist’s best work, it’s crucial that they all become acquainted first. “When we meet an artist, we might not even work on music for hours,” he explains. “We’ll sit, talk, get to know each other. We get to a point where something will trigger––there’ll be a spark––and that’ll be the moment. The idea [for a song] might start right there.”

Recently the team worked closely with Bruno Mars, particularly on the singles “That’s What I Like” and “24K Magic” from his 2016 record 24K Magic. But the relationship’s roots reach back to 2007 when the connection was made initially. “We were part of the producing/writing circuit,” Romulus recalls, “[and] once we started to build momentum, every session we’d call Phil [Lawrence, Mars’ primary producer] and Bruno and say ‘Hey, can you guys be our top-liner for these sessions?’ We did that for a couple of years.”

The relationship with Mars faded for a time, but was revived recently when Yip reached out. “[Bruno] told us he was finishing up his album and asked us to send him some ideas,” the producer recollects. “Jonathan sent a few tracks that he liked and he asked us to come in. That song happened to be ‘24K Magic.’ He had a few more unfinished ideas and asked for our help. That was the beginning; like a new start for us.”

As in any career, challenges arise regularly, as Romulus explains. “People would come in with their artists and try to give us direction. They want [a song] to sound exactly like what’s on the radio now. It’s a fine line, but at the end of the day we end up making things that we love and believe in. But you also have to remember that this is a music business. It’s not just about making whatever you want. You have to make music that the artist and the label will love.”

Despite The Stereotypes’ trio of Grammy nominations this year, Romulus remains focused on his work. The team has a number of projects on the horizon, including development of emerging artist Destiny Rogers, producing Grammy-winning singer Meghan Trainor and work with RCA-signed rapper GoldLink. Andy Summers at the Regent Theater in ...