Navigating the ever-changing world of music publishing and trying to remain creative is a daunting task. With music streaming replacing both download and physical sales, there are more opportunities for artists to accrue royalties. However, with new technologies comes new obstacles for one to overcome as well as to understand how the playing field works.

Since I have survived as an artist in the music industry for over 30 years, I have had a lot of different publishing administrators, both large and small, but at the end of the day they are really just interested in their 15% cut and do very little for artists. So, years ago, I decided to self-administer my catalog and record label. This resulted in a huge clean-up of mistakes that my past administrators made. Everything from song registration corrections with PROs to back collection on royalties mispaid to other publishers that were supposed to be paid to my company.

For the purposes of this article, I thought the best way to serve artists is to go directly to The Harry Fox Agency, who I have been affiliated with for decades. The following interview is with a great ally of mine at HFA, Ashley Morey, who is a senior manager at client services.

Tarquin: For new artists, what are the most important factors they need to know about music publishing?

Ashley: If you’re an artist and writing your own songs, that, by default, makes you a music publisher if you haven’t signed a deal with a publishing administrator. It’s important for artists who are writing their own material to educate themselves on all the different right types and income streams, so they know exactly where to look and who to contact for different types of uses. While a composition can be recorded by a variety of different artists, resulting in different master recordings, and therefore, different sound recording rightsholders, the composition itself is what’s controlled by the publisher. The publisher collects royalties for the use of that composition regardless of who records it.

On the flipside, if you are an artist and are recording a song that you didn’t write, it’s important to keep in mind that you need a license from the publisher or publishers who control that composition in order to distribute your recording. Just because you’re singing the latest single from Taylor Swift doesn’t mean you own it now. I think a lot of new artists or music fans don’t realize that. Yes, you control the sound recording rights if you made the recording on your own, but someone else wrote the song. You need to get a license from them in order to distribute it. 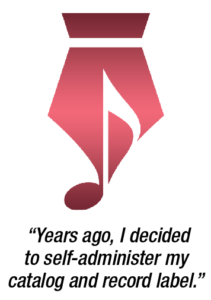 Tarquin: Can you explain what are mechanical royalties and how they are calculated?

Ashley: Mechanical royalties are the royalties earned as a result of a composition being reproduced on an audio-only (not audio-visual) physical or digital product. In the traditional sense, that means that every time a vinyl record or a CD or a cassette is sold, there is a mechanical royalty paid to the publisher controlling each composition recorded on the product. It’s also true in the digital sense for individual track or full album downloads, or, in today’s most common occurrence, each stream played by a user on an interactive streaming platform such as Spotify or Apple Music. In the U.S., mechanical royalties are established and revised over time by law. For a traditional mechanical use, such as on a physical album or digital track download, the rate is 9.1 cents per unit per song. For example, let’s say you co-wrote a song with someone and collect 50% of the publishing for that song. Now, another artist wants to record this song on an album and they’re pressing 1,000 copies. The mechanical royalty the artist or label is required to pay to you would be .091 (9.1 cents) x 1000 (units) x .5 (your 50% share on the song) = $45.50. The calculations become more complicated with the streaming services, because they account for various service types and subscriber numbers which fluctuate month by month. However, HFA has a great rate calculation resource which explains the breakdown in detail and it’s available publicly on our website (harryfox.com/#/rate-charts).

Tarquin: What are the differences between mechanical royalties and performance royalties?

Ashley: The key difference between mechanical and performance royalties is that mechanical royalties are the result of a distribution of a recorded piece of music, either in physical form or a digital file on your device, to the public for private use. Public performance royalties (or performance license fees) are derived from the right to perform publicly a song live, play a recording in a club, play it on the radio or on television, in a retail establishment including restaurants or streamed online. Essentially, public performances are either live performances or transmissions to places of public gatherings like bars and retail establishments. Performance royalties are generated anywhere from a band performing songs in a venue, to the music at the grocery store so effortlessly inspiring impulse buys, to the selection of songs by your favorite DJ on the radio.

Tarquin: How have mechanicals changed from physical sales to now mostly streaming?

Ashley: In 2013, mechanical royalty income tracking focused nearly exclusively on making sure that commercial physical products releases were accounted for; tracking units sold on SoundScan and doing analysis to ensure that labels were reporting properly to HFA. In 2020, that has completely flipped. About 99% of the income tracking inquiries we receive are asking about royalties from online distributions. Everything is happening much faster and on a much more granular level and the publishing community has done a great job in stepping up and playing a proactive role in ensuring their work information is correct.

Tarquin: Does an artist still have to pay advance mechanical royalties when covering a song or does the Digital Streaming Services pay for it now?

Ashley: Generally speaking, a mechanical license is required anytime you are reproducing and distributing a copyrighted work that you do not own or control. However, many streaming services have taken on the obligation to license the content on their service rather than simply acting as a digital storefront. If you are unsure, your distributor can likely help you determine which services fall into this category, or you can contact the specific service directly.

Tarquin: What challenges will Harry Fox face with the ever-changing music industry?

Ashley: It’s a groundbreaking time for mechanical licensing with the recent changes in the law leading to the formation of the Mechanical Licensing Collective. HFA will continue to provide new services to the publishing community and music industry as a whole in new and interesting ways outside of the traditional mechanical licensing box. The music industry changes quickly, and in just seven years at HFA, I’ve witnessed drastic changes both in the industry and copyright law. The ever present need to evolve over the years has caused me to thrive, grow, and learn more about publishing, copyright, and licensing than I could have ever imagined. It’s that passion and knowledge that I believe keeps HFA relevant throughout the ever-changing industry.