Barry Manilow with the Los Angeles Philharmonic at the Hollywood Bowl

Exactly one week after the Hollywood Bowl was lit up with a swath of multi-colored lightsabers waved by little kids, their parents and grandparents alike in honor of the legendary film composer John Williams, everyone who ventured out to see the living, breathing swirl of melodic energy that is Barry Manilow was greeted with green glow sticks on their seats.

With no galactic battles to be fought, the thousands of adoring “Fanilows” were free to wave and tap their glowsticks in time to a 90 minute whirlwind of hits that covered an astounding 23 of the 25 Top 40 hits, either in full or in a medley towards the end of the show, Manilow racked up between 1974 and 1983. The show started with him bursting into our collective pop consciousness with his #1 trademark hit “Mandy” (“She introduced me to all of you,” he said in one of his many expressions of gratitude) and wrapped up with Jim Steinman’s epic 1983 ballad “Read ‘Em and Weep.” At a few junctures during the tireless performance, which featured sweeping arrangements from the LA Phil, the singer referenced his age and longevity, saying “not bad for a 76-year-old guy” and joked that his first album came out in “1821.” His cool confidence made it okay for decades-long fans like myself to admit that I had numerous LPs, cassettes and CDs during his heyday and beyond, and to reflect on the 35 years between my first Manilow concert and this one.

Clearly, he was aware that most of his crowd had seen him a gazillion times before. Hey, who doesn’t want to whistle along to the intro of “Can’t Smile Without You” one more time? Yet, for those concertgoers who were “dragged along” (one of his longstanding self-deprecating bits) and to add warmth and intimacy to the show, Manilow introduced autobiographical tidbits between songs that shined an intimate light on his humble beginnings. He made the Bowl his living room as he ran a scratchy clip of “Baby Barry” singing on his grandfather’s urging and seemed genuinely moved to share the stunning moment of his grandfather seeing him all grown up, singing at Carnegie Hall.

Another personal tidbit Manilow divulged between songs—one well known to fans who grew up with him as the romantic soundtrack of their younger lives—was that he never intended to be a megastar. "I just wanted to be a composer,” he said with trademark whimsy. Before Arista Records founder Clive Davis convinced him to record “Mandy,” Manilow made part of his living writing commercial jingles that any kid growing up in the '70s knows by heart. His addition of the jingles “I am stuck on Band-Aids” and “Just like a good neighbor, State Farm is there” to the setlist was a welcome treat. Just like his voice, which is a bit raspier than in his 30s but still has emotion and power to spare, Manilow’s instantly recognizable hits have aged well. As he pointed out in a slight jibe to today’s music (which he admitted is full of cool rhythms and loops), his tunes reflect a time in pop music when melody was king. His glorious formula of starting songs with gentle piano intros and ending them in sweeping final chorus crescendos seemed tailor-made for a performance with the LA Phil.

Ballads like “Looks Like We Made It,” “Even Now,” “This One’s For You” and “Weekend in New England” capture all the competing joys and sorrows of love gained, lost and looked wistfully back upon. “This is My Town,” the title track to his most recent album, celebrates Manilow's love affair with his hometown, New York City, first chronicled in 1975 with “New York City Rhythm” and later tapped into with “Brooklyn Blues.”Another bittersweet tune was his dramatic rendition of Andrew Lloyd Webber's “Memory,” which, Barry being Barry, he introduced with two comical asides: “It’s from Cats, which is a musical about…Cats” and the fact that his and Barbra Streisand’s ability to score hits with the song somehow correlates the size of their noses.

When most people think of Manilow, they usually think “master balladeer.” And when he pulled out a stool and sang “I Made It Through the Rain,” a song that captures his ability to not only survive but thrive in the fickle music industry for 45 years, he was in peak balladry mode.

Yet Manilow’s up-tempo gems were just as engaging, and he started the show with two of his best: “It’s a Miracle” and “Daybreak.” He also ended on a high with a rousing take on “Copacabana,” the Latin-tinged movie within a song performed to jubilant effect with a high school gospel choir. Another highlight was “Could It Be Magic,” which morphed from its familiar ballad form into the disco version that Donna Summer took to the top of the dance charts. 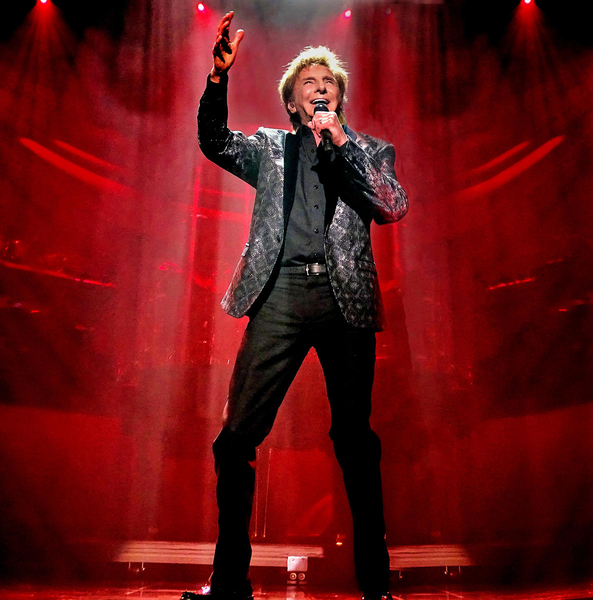 Photo credit (this and feature photo): Courtesy of the Los Angeles Philharmonic Association

The moment also gave Manilow a chance to fully engage and interact with his phenomenally soulful backup singers (and dancers!) Kye Brackett, Sharon Hendrix and Melanie Taylor. The young choir first came onstage, flanking Manilow and his ten-piece ensemble, to ensure that take Manilow’s trademark “I Write the Songs” was given its proper ironic, spiritual place in his canon. As any “Fanilow” can tell you, he didn’t write that song.

Opening for Manilow was Lorna Luft, who engaged the crowd in a Broadway-worthy performance of classic songs by her legendary mother Judy Garland. The songs were couched magnificently in a rambunctious 20-minute medley filled with musical snippets and an insightful biographical narrative—as told to Luft’s children, who never met their famous grandmother... The performance exalted Garland’s triumph and tragedy filled life. Tycho at the Greek Theatre in Berkeley, ... The Drop: Avril Lavigne at The Grammy ...