Home›Latest›Tyminski Turns L.A.’s The Village Studios into a Night of Southern Gothic

Tyminski Turns L.A.’s The Village Studios into a Night of Southern Gothic

Bluegrass, pop and country singer-songwriter Tyminski previewed his upcoming solo album Southern Gothic at The Village Studios in West Los Angeles on Thursday, Aug. 17. Tyminski, a longtime member of Alison Krauss and Union Station, and acclaimed vocalist on “Man of Constant Sorrow” from the multi-Grammy-winning O Brother, Where Art Thou? soundtrack and Avicii’s smash single “Brother,” is releasing his album through Mercury Records Nashville on Oct 20. 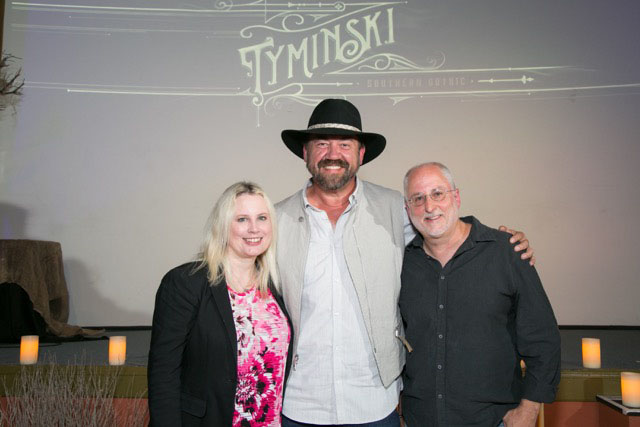 The second in a series of preview events leading up to the release of Southern Gothic, the evening highlighted six of the 13 tracks on the album, beginning with a unique audio and video presentation in the converted one-time Masonic temple — the birthplace of classic records including Aja by Steely Dan, Tusk by Fleetwood Mac, Joe's Garage by Frank Zappa, and Planet Waves by Bob Dylan & The Band, to name a few.

“The breadth and types of music being covered on Southern Gothic cross so many genres, and UMG could not be more proud and supportive of Tyminski’s latest work. Tyminski has created a totally unique and special record,” welcomed UMGN President Cindy Mabe, who then turned the microphone over to KCSN radio host Jim Nelson, for an up-close-and-personal Q&A with the 14-time GRAMMY®-winner himself. “I couldn’t be any more proud of this record and the people I got to collaborate with to make this album,” stated Tyminski. “I got to work with the cream of the crop, including producer Jesse Frasure [Thomas Rhett, Lauren Alaina] and leading songwriters Sarah Buxton [‘Stupid Boy’], Josh Kear [‘Need You Now’], Andrew Dorff [‘Neon Light’] and many others.”

In Southern Gothic, Tyminski has crafted an American quilt of music that is a melding of genres, and in which the symbolism of light and dark seem to always be at odds. “I feel that the light and dark in this record are truly my journey, my personal journey in life,” explained Tyminski. “I think we all feel that whisper from each side of your shoulders, someone saying, ‘yeah, do it,’ or ‘no, don’t do it.’ I have an enormous struggle with that in my life, but it’s something that I’m aware of. I try to make sure that I understand what the right voice is. I don’t make quick decisions, because light and dark, in my opinion, can often look very similar.”