Country music icon Tracy Lawrence continues his philanthropic tradition with the 16th Annual Mission:Possible Turkey Fry and Benefit Concert which provides much-needed support to Nashville Rescue Mission. This year's event took place on November 23rd and raised an impressive $175,000 for Nashville Rescue Mission - the largest sum raised by a single Mission:Possible fundraising event to date. Cumulatively with last year's turkey fry and this year's annual golf tournament $325,000 has been raised for the mission in a single calendar year.

Volunteers began arriving at 7am to the Nashville Rescue Mission parking lot to ignite their fryers with Lawrence dropping the first bird at 8am. The chilly morning was spent in fellowship as selfless folks from around the Nashville area helped fry 500 turkeys that provided approximately 5,000 meals to those in need. 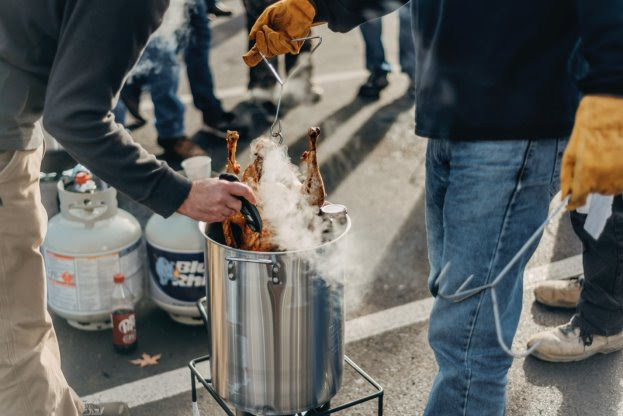 During the Turkey Fry, Tracy was presented with the honorary title of Tennessee Colonel in recognition of his years of philanthropic service to Nashville and greater Tennessee.

“It is a rare privilege to stand alongside someone with such an earnest heart for service, and so I consider it an honor to present Tracy with the prestigious title of Tennessee Colonel,” said Senator Blackburn. “Last year alone, his work with the Nashville Rescue Mission fed thousands of people and raised more than $100,000 in donations for the homeless and hungry. This is what love looks like and I thank Tracy from the bottom of my heart for giving that love so freely to the people of Nashville.”
Later that evening, Tracy and a few friends took the stage at SkyDeck at Assembly Hall for the benefit concert. Opening the concert was David Tolliver who welcomed the crowd to the rooftop outdoor space and got everyone in the mood for an evening full of great music. Lawrence then took the stage to thank volunteers, sponsors and everyone who helped make the day an overwhelming success. He was then joined on-stage by Country music stars Dustin Lynch, Michael Ray and Lainey Wilson where each took turns playing acoustic versions of some of their hit songs.

This year not only marks the 16th Annual Mission:Possible Turkey Fry and Benefit Concert, but also commemorates Tracy's 30th anniversary making unforgettable Country hits. In 2021, Tracy began rolling out his Hindsight 2020 project which encompasses three volumes of his classic songs alongside all-new tracks. On January 28th, Tracy will round out Hindsight 2020 with the release of Volume 3: Angelina, the final chapter that brings us to his career thus far and sets the stage for even more music from this enduring artist.

To create, promote and implement the Mission:Possible Turkey Fry to feed homeless men, women and children and raise awareness to the plight of the homeless.

Launched in 2006, the nonprofit’s Turkey Fry event has since raised over $600,000 for Nashville Rescue Mission and has fried over 6,400 turkeys and provided over 90,000 meals to the homeless and hungry of Middle Tennessee.