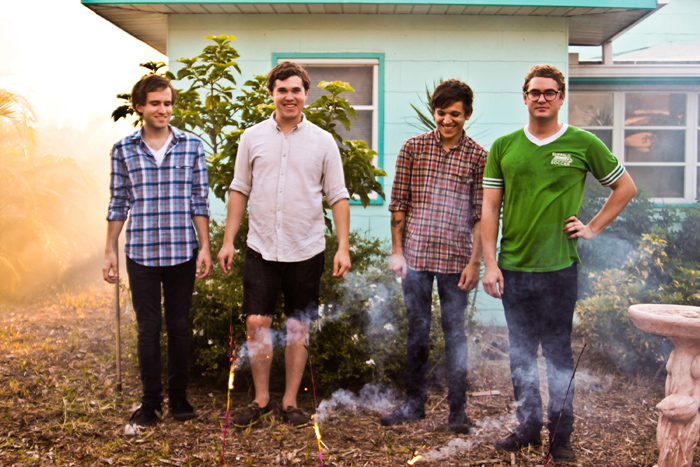 With a debut album (recorded in singer-guitarist JP Pitts’ bedroom in Florida) out on New York indie label Kanine Records and a year’s worth of touring that included high-profile festival dates, Surfer Blood were doing pretty well on their own. In fact, better than they ever expected, as Pitts puts it. But when a fan named Ryan Whalley, who frequented Surfer Blood shows, turned out to be an A&R rep with Warner Bros., the Pixies-meets-Ramones indie rock band found themselves signing a three-album deal with an option for a fourth.

Such a big leap with a big label took some adjusting to on Surfer Blood’s part. “You have to be friendly. Don’t be antagonistic,” Pitts says. “We’ve been that way in the past, usually out of fear and insecurity. If they sign you, it’s for a reason. They’re on your side.”

Surfer Blood’s upcoming LP Pythons, a follow-up to their 2011 Tarot Classics EP, is the first album the band have done with a label’s input. “It’s a lot of people to work with. It’s interesting,” he says. “Sometimes it feels like a big company, but so far our relationship has been positive, they’ve been supportive of our ideas and haven’t been stifling creatively in any way.” The only difference is having to wait for a record to come out, and that’s something we’ve never had to do before.”

According to Pitts, fans can expect from Pythons' more concise songwriting and a denser, sonically bigger record with drums that “have more attack and bite” and “wider” guitars. “And I learned how to sing, so vocals sound better,” he adds.

Pitts attributes the outcome of Pythons in large part to moving up from bedroom recording to studio recording, as well as the precision of producer Gil Norton (Pixies, Foo Fighters, Jimmy Eat World), who main- tained a long-term interest in the band. Norton had talked with them about producing a Surfer Blood album since 2010, which finally came to fruition with Pythons.

“Norton is a really positive, enthusiastic man,” says Pitts. “He’s opinionated and pushy, and I like all that. The pressure from time spent in the studio brings out a lot of ideas that wouldn’t come to you if you had all the time in the world to make a record.” Pythons drops June 2013.