Long Island-based producer and engineer Dan Korneff got his start as a drummer. After recording a demo with his band, he realized that he might be better suited for production. Although largely self-taught, after high school he enrolled in Five Towns College, where he learned the science behind sound. He’s since produced and engineered for bands including My Chemical Romance, Papa Roach and Paramore.

At the start of a new project, typically he sits with a band and they listen to demos. Together they set goals for the record and identify influences, among other things. “Once we get the demos arranged, we’ll go into pre-production,” Korneff explains. “Then we go into tracking. I own a studio called Sonic Debris, which is where I do most of my work.”

Korneff concedes that technology can be a mixed blessing. “There’s always something that breaks at the wrong time,” he observes. “I recall once when I was engineering a Paramore record. We’d completed tracking and I was doing a backup when we had complete system failure. The motherboard had blown up; one of the caps had burst. I stayed up all night trying to solve the issue. By the time I figured it out, it was nine in the morning. I had to replace it before the band got back later that day. Luckily, none of the work was lost.”

To Korneff, having so many artificial sounds causes engineers and musicians to lose sight of music’s true value. “I was brought up on tape,” he explains. “I started with a linear recording process of start to finish, which made me focus on getting proper takes. Kids these days miss out on that aspect. It’s all fake. Trying to understand what music actually is might be their biggest challenge.” 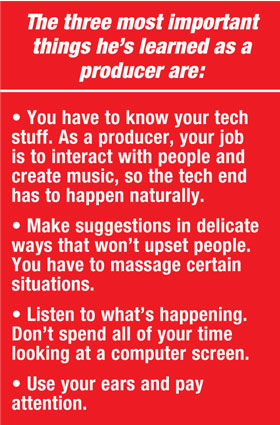 Aside from his SSL G-Series console, one of his favorite pieces of studio gear is a vintage Roger Mayer RM 58 Studio Compressor. “It’s very rare and has a super unique sound,” the producer says. “I love that thing. And for rock, it’s hard to beat a Marshall-cranked Les Paul. But technically speaking, they’re really hard to keep in tune with the old wood in the neck. I’m also a fan of taking a cheap guitar, ripping out the electronics and putting in new stuff. It sounds awesome.”

The business of production is constantly changing. Accordingly, Korneff cautions newcomers to be positive that they’ve made the right career choice. “Be sure that you really want to do this,” he advises. “One day you’ll get your wish and you’ll spend 18 hours [a day] in the studio.”

Recently he completed production on (Fearless Records) Motionless in White’s Reincarnate. When Music Connection spoke with him, he was completing work in the studio with Pierce The Veil, another Fearless-signed band.

What are his feelings about rock music’s future? “We’re in a spot where it’s hard to find interesting new things,” he asserts. “I think [rock] will be around for a while. We just have to have someone take a chance and do something different. No one’s quite created a new genre yet.”