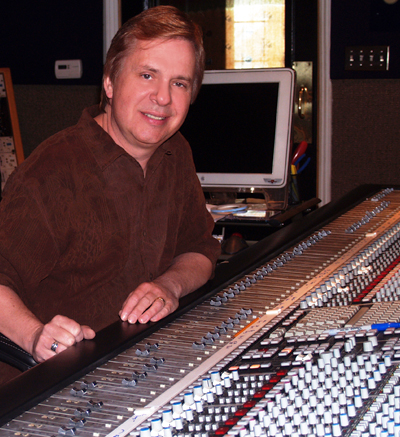 After 26 years as owner of his famed original studio on Larchmont (in Los Angeles) and a second location in North Hollywood, Skip Saylor (http://skipsaylor.com) made bold career decisions in the mid-2000s which brought him back to his original passion as an engineer and producer.

After selling all but one roomful of his favorite equipment, he flew to New Zealand for a gig producing and engineering an album for the young funk-soul-ska band Spacifix, which later won Album of the Year at the Pacific Music Awards. Inspired by this experience, Saylor began building a studio in the barn on ranch property he had purchased near the Van Nuys Airport. “All those classic rooms in town have high ceilings, which made my two story barn, with its natural acoustics, the perfect setting for my new room.”

Saylor, credited on eight of Billboard’s Top 300 selling records of all time, brought a star studded history to his now thriving studio. Launching his career with gigs on classic projects like Tom Petty’s Damn The Torpedoes (under Jimmy Iovine) and The Wiz (Diana Ross and Michael Jackson), Saylor later engineered for everyone, from classic R&B artists like the Whispers to Mattel Toy commercials. His facility on Larchmont hosted many classic sessions, including Grammy winning k.d. lang’s Ingenue, Guns N’ Roses’ Use Your Illusion I & II, Ice Cube’s The Predator, Santana’s Supernatural, Boyz II Men’s II and Foo Fighters’ The Colour and the Shape.

“While we do host sessions for outside clients, my studio was built around the idea of being an engineer/producer with my own space instead of a commercial facility,” Saylor says. “My other studios were successful, but I spent a lot of time running the business. These days, I don’t look at myself as a studio owner but as a producer/mixer with my own rig. I have a couple of young engineers I use on my projects, Ian Blanch and Lester Mendoza, and I love working in my own space where I have all the tools I need to make great recordings.”

Having used some of the highest end new and vintage equipment, Saylor is selective in the gear he chooses to work with to ensure excellent sound. The centerpiece is the 100 input SSL that he has had since the mid-‘90s, which he calls “the best sounding board I ever owned.”

Saylor’s wife, singer-songwriter Lynn Carey Saylor, has been endorsed by several amp and guitar companies, so the studio is full of Goodsell and Wizard Amps (which AC/DC uses) as well as guitars, a classic 1956 Hammond B-3, a Yamaha Grand, in addition to classic mics and outboard gear like an EMT 252, AMS Reverb and Delays and UREI Limiters and Compressors.

In Saylor’s earlier days as a mixer, he often resisted the advice friends and colleagues gave him about the value of diversification. But with the new studio, that has happened naturally, and he has worked on a unique array of projects in recent years. Two recordings typifying Saylor’s slate of projects include vocalist/guitarist Jonathan Butler’s “Grace and Mercy,” which hit No. 1 on the Billboard Contemporary Jazz chart and No. 9 on the Gospel charts; and a self titled project for indie rockers Bootstraps (on Redeye Records, original label of the Black Keys), whose songs received 10 placements (Parenthood, Private Practice) even before the album was released. Songs from that project were also in an independent film, which earned “Best Music in a Film” at the Nashville Film Festival.

Saylor has recently been tapped to be Director of Sound for the animated film, California Dreamers, the brainchild of writer-director-producer Jay Segura, which finds Saylor restoring 24-track tape recordings of hip-hop greats including Kurtis Blow, Melle Mel and Tone Loc. The soundtrack also features new productions. Earlier in 2012, he co-produced and mixed “High Off The Fame,” a Top 30 dance single by Candyman 187 featuring Snoop Dogg. Other projects include a single with Rap legend W.C. (Westside Connection) and European star Brainpower and material for Los Angeles acts Ceasefire, LA Velvet and End of Ever.

Sometimes dubbed the Compound, Saylor’s facility has bedrooms, kitchens and living areas for artists to utilize during their projects. “I enjoy the diversity of work I do here,” says Saylor, “and I strive to offer the best tools for making the highest quality recordings, providing an environment where the artist is comfortable and can thrive.”