It was the stuff of dreams the night of Aug. 14 when I attended Snoh Aalegra’s album release party at Delilah. Being a recent LA transplant, I had forgotten to be fashionably late and showed up at the venue promptly at 9 PM (the stated start time). Other writers and photographers were already there staking out the place and claiming a small section of the swanky lounge to themselves. I sat down at a booth to take in the whole experience before the craziness ensued. Just one hour later, the sparsely-filled Delilah would turn into a densely-packed celebration complete with amazing beats, DJs and a drink or two. People crowded the bar in hopes of catching the bartender’s attention to put in their order. Professionally-dressed servers nuzzled and pushed their way through the crowd to serve party-goers an appetizing assortment of (what I could tell) sliders and sushi. As I walked about the room, I saw some pretty glamorous sights from a wide array designer purses to the latest fashion trends and possibly even a celebrity. Being the green, Georgia girl that I am, I did my best to play it super cool and not let on just how excited I was. Around 11 PM, while the party was in full swing, Snoh Aalegra herself entered the venue with photographers and videographers following her every move. As she made her rounds personally thanking family, friends and fans for being there all we could see were flashing lights. It was at this moment that the realization hit me that I really had moved to LA—city of stars, Tinseltown, whatever else you call it to really drive home the fact that I lived in what is still celebrity stomping ground. Aalegra wore a teal mini dress paired with socks and sneakers—the perfect mix of glam and down-to-earth, which is probably a good way to describe her music. The room was buzzing. You could feel just how excited partygoers were to see her and I was excited to finally see her perform live. For an unknown reason, she wasn't able to do a live performance but after a bit of waiting around and a brief introduction, Aalegra took the stage and played a selection of songs from her upcoming album, -Ugh, those feels again. She told us about her journey (“it’s not the destination, it’s the journey) in creating her album. During her talk, you could still hear bits of chatter here and there from partygoers. Those were quickly squashed by someone in her entourage and she continued on telling the crowd about the time she was in a "situationship" (the title of one of her songs) and more background details to each track. I really enjoyed the laidback R&B vibe that her music gave off that sort of reminded me of Alicia Keys. Aalegra herself has a nice voice with a clear, deep tone. Those are the types of vocals I am drawn to and it really seems to suit her music, the themes of which revolve around heartbreak/relationships. As noted by one of my friends, hers is definitely the type of music you listen to by yourself in the car so you can fully experience the emotions she put into her record and maybe have a cry or two. Unfortunately, because I'm over the 25-year-old hill and I like to get to bed early, 12 AM was just too late for me to be up. So, I had to leave before the party was over. But, I am so glad that I got to experience Snoh Aalegra and what Hollywood has to offer, even if my early exit meant I missed out on snagging an awesome t-shirt. 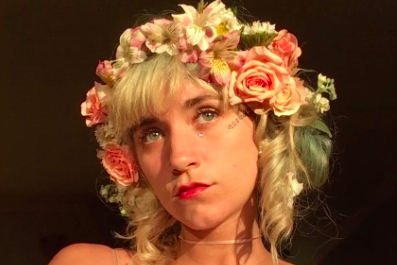