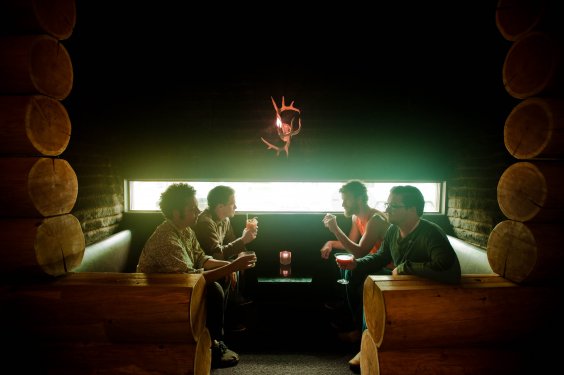 What’s in a name? A little over a year ago this question was asked of Mwahaha in regard to both their name, and their self-titled independent debut. The answer?  A flurry of accolades, a performance at Warp Records’ SXSW showcase, shout outs from from NPR & Spin Magazine amongst others, and a tour of the South and the Midwest including 2012's Treefort Festival. All of the attention drew the eye of Plug Research, who subsequently signed the band. On March 26, 2013 Mwahaha will be re-issued by the label world-wide and will appear for the first time on vinyl, complete with new tracks not found on the original release, creating an expanded edition.

The band consists of Ross Peacock (formerly of Clipd Beaks) and brothers Nathan and Cyrus Tilton (all three were previously in the Bay Area cult band NED). Throbbing ebb and flow, electronic undercurrents and elated pop flourishes characterize the album. Instruments are filtered through an array of analog synths, analog drum machines exist in harmony with live drums, and over morphing walls of sound and spiraling sonic landscapes, Peacock’s lyrics and oftentimes haunting vocals distinctly ground the album.

The members of Mwahaha have been writing and performing together for close to 10 years in various bands. The band is hard at work on their follow-up release for Plug Research and continues to adhere to their original tenet: "There are times you see a band perform and you're blown away by the live show, but you bring the album home and that special something just isn't captured in the recordings," Peacock says. "We weren't going to perform live until we had a record that the live show would have to live up to... something that documented the changes and struggles we all deal with, but with space to grow with and into what the listener needs it to be.”