Photographer and musician Markus Cuff died Dec. 22 in Los Angeles after a long battle with cancer. He was 74.

Active professionally as a photographer in Los Angeles from the late 1980s, Cuff was a contributor to the Easy Rider Group’s publications Tattoo Magazine and Tattoo Flash, as well as various special editions devoted to the tattoo arts. His work for the publications between 2006 and 2013 was collected in the 2015 book Torso.

In critic Kristine McKenna’s introduction to the volume, Cuff tied his interest in intricate tattoos to his long-term enthusiasm for the visual art of Japan, the source country of the body art form: “One of the things that appeals to me about photographing tattoos is their strong element of Japanese art; I grew up admiring Hokusai, and ended up photographing what are essentially woodblock prints on people’s bodies.”

Born in Boston and raised in Maryland, outside Washington, D.C., he took an interest in photography early in life: he told McKenna that as a boy he was “riding around on my bike and photographing ambulances like a photojournalist, but it never occurred to me to be a professional photographer.”

His first love was music. He began drumming in junior high school, and was initially active professionally during the 1970s, when he became involved in the country and bluegrass scene in the D.C. area, while pursuing studies in philosophy and psychology at Maryland University.

Cuff appeared on Pieces of the Sky, the major label debut of Emmylou Harris, who was also a product of the local scene, and was a touring member of her Angel Band. He also played on The New Seldom Scene Album, a 1976 LP by the titular progressive bluegrass act — which, unlike more traditional bluegrass groups, did not eschew the use of drums — and on Long Time Gone, the 1980 solo debut by the Seldom Scene’s lead singer John Starling.

By the time the latter record was released, Cuff had relocated to Los Angeles, where he spent four years as a member of the local new wave band the Textones, which also featured singer-songwriter Carla Olson, guitarist and future member of the Go-Go’s Kathy Valentine, and future Dream Syndicate bassist David Provost. He appeared on the Textones’ original single version of Valentine’s song “Vacation,” later a hit for the Go-Go’s.

However, Cuff came to realize that performing music would not become a long-term career and drifted off the scene. While managing the hip clothing store Let It Rock on L.A.’s Melrose Avenue fashion strip, he began to assist a staff photographer who worked at a commercial studio next door, and he ultimately enrolled at Santa Monica City College to study the craft. In Torso, he credited his interest in the writings of psychologist Carl Jung for enhancing his understanding of the visual arts: “I understood where I was supposed to be going, and at that point I became serious about photography.”

In addition to compiling a library of thousands of negatives devoted to tattooing, Cuff remained in close contact with the music community: His photographs appeared on the covers of albums by Carla Olson, Lee Rocker of the Stray Cats, Richie Ramone of the foundational punk band the Ramones, and blues performers Guitar Shorty, Phil Upchurch, Barry Goldberg, and Roy Rogers. Night Comes Falling, a duo album by Olson and singer-songwriter-guitarist Stephen McCarthy of the Long Ryders bearing several of his shots, was issued shortly before his death.

He is survived by his sisters Diane Leffler and Michelle Cuff and daughter Jessica van Brakle. 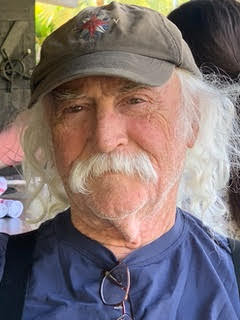