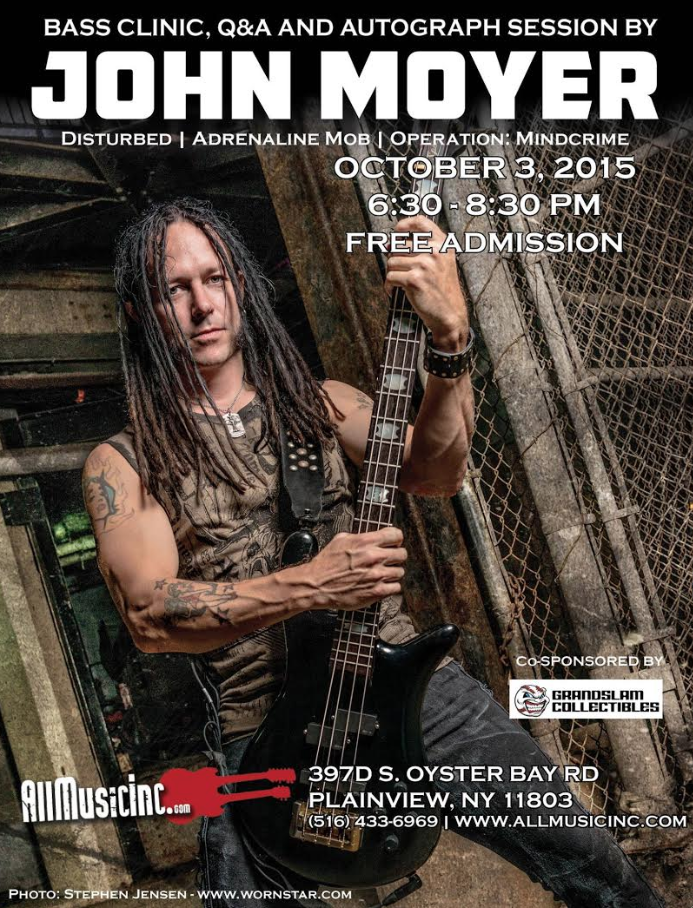 On Saturday, Oct. 3, from 6:30 - 8:30 p.m. All Music Inc. will be host to an informative event for bass players and heavy metal fans alike who want to both meet and learn from Disturbed, Adrenaline Mob and Operation: Mindcrime bassist John Moyer. Following Disturbed’s recent climb to No. 1 on the Billboard 200 Album chart with their sixth studio album Immortalized earlier this month—Moyer is set to hit the road this March in support, so Grandslam! is providing a chance to get up close and personal before he heads out on tour.

Prior to joining Disturbed, Moyer played in rock bands The Union Underground and Soak, both major label acts hailing from Texas. Having joined Disturbed in 2004, his playing can be heard on the band’s third (Ten Thousand Fists), fourth (Indestructible), fifth (Asylum) and sixth (Immortalized) albums. All four albums debuted at No. 1 on the Billboard 200. Moyer also played on the Disturbed release The Lost Children, a collection of B-sides and rarities. Disturbed was also nominated for a Grammy Award for their song “Inside The Fire” off Indestructible. He joined Adrenaline Mob in 2012, and his most recent performances can be heard on Adrenaline Mob’s 2013 cover album Coverta and 2014’s Men of Honor.

The owner of Natural Ear Music Rock School in Austin, TX, Moyer’s award-winning school has a long history of teaching music and performance skills to young rockers and turning out a number of professional musicians. As a producer, he works with independent rock and metal bands, and in 2011 he released a bass instructional video titled “Modern Metal Bass” for Rock House Publishing. He also penned the score for the video game Scivelation, a third-person shooter for Microsoft Windows, Xbox 360 and PlayStation 3 released in 2014.

Currently playing Spector basses and Hartke amps, from 2008 to 2013 Moyer had a signature line of basses with BC Rich. He and the company produced his signature BC Rich Havoc, and he also has a signature line of speaker cabinets and practice amps with Kustom, featuring his own design of a skull engulfed in flames printed on the front.

Now, as All Music Inc. prepares to host Moyer on Saturday, Oct. 3, 6:30-8:30 p.m. with Grandslam!, heavy metal fans and bass players can prepare to get up close and personal for a bass clinic, Q&A session and autograph signing with the Grammy-nominated musician, producer and instructor.