Alto Reed, whose saxophone provided a clarion call as part of Bob Seger hits such as "Rock and Roll Never Forgets," "Old Time Rock and Roll" and, of course, "Turn the Page," passed away at the age of 72, on December 30th after battling stage four colon cancer.

Born Thomas Neal Cartmell in Detroit, Reed was part of Seger's Silver Bullet Band since its inception, playing on 14 albums. Onstage, he was Seger's visual foil, playing a variety of saxophones, swinging from ropes, sprinting between elevated platforms at either side of the stage, blowing through two saxophones at the same time, playing maracas and timpani behind the drummer during "Come to Poppa" and duck-walking and leg-kicking vamping across the stage during his extended solos on "Horizontal Bop."

"I loved him like a brother," Seger said in a statement. "I may have been the leader, but he was our rock star. He was the audience favorite, hands down. He was bold, and worldly. I learned so much from the guy. And he was a great ambassador to the fans. He took time for everybody, any picture, anywhere. I can't say enough good things about him."

In a statement, Reed's daughters Chelsea Reed Radler and Victoria Reed, said that, "Our hearts are deeply broken by this enormous loss, but also filled with gratitude as we reflect on his legacy and how incredibly lucky we've been to get to call such a special guy dad."

The Silver Bullet Band was Reed's main but hardly his only musical outlet. His credits over the years included working with Grand Funk Railroad, Ted Nugent, Little Feat, Foghat, Dave Mason, Spencer Davis, the Blues Brothers, George Thorogood, Robin Gibb, the Motor City Horns and more. Four years after playing for Seger's induction into the Rock and Roll Hall of Fame Reed was back at the Waldorf Astoria Hotel with the Ventures, playing on their "Hawaii Five-O" theme during their induction. 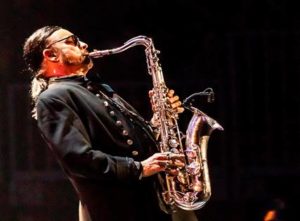 On his own, meanwhile, Reed co-led the Reed & Dickinson Band with Steve Dickinson, releasing the album "Tonight We Ride." He also released a solo album, "Cool Breeze," during 1997 that allowed him to explore R&B and jazz elements.

"I like all kinds of music -- I love all music, really," Reed once said. "But what I love most is performing. Being on the stage is where it really happens for me. I feel the energy of the crowd and the other musicians, I feed off of it, and that just changes everything I'm playing."

Raised in Detroit and later Saint Clair Shores, Reed began playing music at an early age, inspired by a school teacher. He started working with Seger in 1971, sitting in on sessions for the 1973 album "Back in '72" and was part of the original Silver Bullet Band lineup formed during 1974 -- and was the only mainstay, other than bassist Chris Campbell, throughout its history.

It was Seger who gave Reed his stage name as well, inspired by the aliases used by Captain Beefheart's Magic Band.

Of all the Seger material, Reed's spotlight moment came with "Turn the Page" from "Back in '72" but popularized on "Live Bullet." He recalled that the haunting solo, which has become one of the most iconic in popular music, was inspired by the band's road manager at the time, Tom Weschler. "We were recording and trying to figure out what we wanted it to sound like," Reed said. "(Weschler) was there and he said to me, 'You know, Alto, picture a black and white movie, The Man With The Golden Arm, late at night, rain on the street in the alley, you’re standing beneath a streetlamp, there’s a light mist coming down. What does that sound like? You hear a plaintive wail in the distance. What does that sound like?”' -- and out came that part. It was a magical moment."

Throughout his Silver Bullet Band tenure Reed continued to make music on his own. He composed the score for the 2001 film adaptation of Jeff Daniels' play "Escanaba in Da Moonlight" and for Daniels' 2002 film "Super Sucker" and led his own band for shows around the country and in Canada. During May of 2012 he was inducted into the Canadian Blues Hall of Fame in Windsor, Ontario. Reed was also a frequent go-to for sporting events, playing the national anthem for all of Detroit's professional sports teams.

When in Hawaii, meanwhile, Reed has performed with Dave Mason, Steven Tyler, Pat Simmons & Michael McDonald, Fergie, Lynda Carter, Alice Cooper & Band, at the December 31, 2016 New Year's Eve for the Shep Gordon Maui Food Bank Gala in Maui, HI, raising enough money for 300,000 meals and then again for the World Whale Watch Day Fundraiser once again in Maui, HI and then with Mick Fleetwood at Mick's Lahaina Club and in March 2017 as a Special Guest with Willie K. at the Willie K. Bluesfest on Maui, Hawaii.

Reed is survived by his children, Chelsea Reed Radler and Jon Radler and Victoria Reed and Erik Deutsch, as well as his grandson, Harry Radler, and his sister, Nancy Neumann and her husband Dave. He also leaves behind his partner Christiana Van Ryn, his stepdaughter Sophia Van Ryn and his ex-wife of 21 years, Monica Reed. Memorial plans are pending.

In lieu of flowers, the family requests donations in Reed's name to the Detroit Symphony Orchestra's Detroit Harmony Fund, which provides instruments to music students in Detroit.

The Reed family has issued a statement urging "friends and fans who loved him to honor his life through regular screenings and other early prevention methods for colon cancer."

It is with a heavy heart that we inform you of the passing of our lifelong friend and band mate, Alto Reed.  Alto passed away this morning at his home with his family by his side after fighting a courageous battle with colon cancer.

Alto has been a part of our musical family, on and off stage, for nearly 50 years.  I first starting playing with Alto in 1971. He was amazing. He could play just about anything…he was funky, could scat, and play tenor sax and alto sax at the same time.

We worked with Alto often and when we booked our first headline arena gigs at Cobo Hall, we asked him to be a part of those shows.  No doubt his iconic performance on Turn The Page helped lift us to another level.  He has been with us on that stage virtually every show, ever since.  And whether it was Turn The Page, Mainstreet, or Old Time Rock And Roll, audiences roared every time he played his part.  In our band, Alto was the rock star.

Off stage, Alto had a passion for discovering and experiencing new things.  He taught me how to sail on Biscayne Bay, we swam with the sharks (unintentionally!), and he often introduced us to local foods and restaurants he had discovered.  I called him Captain.  He was bolder than I was.  I remember visiting him in the Miami area and I found him feeding the manatees in a lagoon behind his house.  Most of us feed the seagulls, Alto fed the manatees!

Alto started a family and was a fabulous father.  He helped raise two talented, beautiful, intelligent young ladies.  Over the years, his passion for music, life and new adventures never diminished.  We loved him like a brother and will miss forever.

Last night, under the light of the full moon and surrounded by family at home, our beautiful father passed gently on to the next realm. Our hearts are deeply broken by this enormous loss, but also filled with gratitude as we reflect on his legacy and how incredibly lucky we‘ve been to get to call such a special guy, dad. He lead an extraordinary life, marked by passion, determination, and dreams come true; an action packed adventure filled top to bottom with love, magic, dear friends, family, and unspeakable joys. The stuff of legends, really.

His skillfulness, dedication and brilliance as an artist and performer made him a hero not only to us, but to thousands of others, if not millions. He lived for the stage and most importantly, his role for nearly 50 years in the Silver Bullet Band with his musical family; Bob, Craig, Chris, and so many other talented musicians who played alongside him. We are truly comforted in knowing that his spirit will shine brightly on through the music that he has left behind, and the impression that he’s had on so many souls in concert.

But beyond all of that, to us, he was and always will be, dad. Loving, supportive, sweet and wise. Working front of house at our elementary school recitals, rigging up lights so we could ice skate at night, taking us tubing til our heads spun, rooting for the Red Wings, teaching us how to ski, fish, shoot pool and harmonize, always sharing in deep conversation, and all the while believing unfailingly in us and our dreams. Oh, and fixing everything, everywhere, always.

We are overwhelmed by and so appreciative of the love and support we have received from friends and those who feel like family during this sensitive time; it means the world to us, truly. And tomorrow, on New Year’s Eve, we will be celebrating his incredible life; we hope everyone that loved him will do the same.

In lieu of flowers we will be accepting donations in his name towards the Detroit Symphony’s Detroit Harmony Fund, whose goal is to put an instrument in the hands of every student in the city of Detroit. We also encourage friends and fans who loved him to honor his life through regular screenings and other early prevention methods for colon cancer.

P.S. Dad, we hope you have fun, flying high over everyone playing your sax, just like you did in the 70s. This time, no wires.