The Beach Boys at Kavli Theatre in Thousand Oaks

The Beach Boys played the Fred Kavli Theatre in Thousand Oaks, CA on March 3rd. For over five decades, The Beach Boys have been one of the best-selling American groups of all time. From being founded by the Wilson Brothers (Brian, Carl and Dennis), their cousin Mike Love, and friend Al Jardine in 1961 in Hawthorne, CA, the band has gone on to play numerous world tours, receive a number of accolades including the Grammy Lifetime Achievement Award and being inducted into the Rock N Roll Hall of Fame, having the record for most songs on the top 40 chart from an American Rock band (36), and selling over 100-million albums world worldwide.

From the original lineup, with the losses of both Carl and Dennis Wilson, the only member still with The Beach Boys is lead vocalist Mike Love, as Brian and Al tour together and with their own bands, but in 2012, to celebrate the bands 50th anniversary, for the first time in over 20 years all surviving Beach Boys played a 75-date world tour and made a new album, That’s Why God Made The Radio. Since then, The Beach Boys have continued to tour again with Love and Beach Boy member Bruce Johnston, who joined the band to be Brian Wilson’s replacement on the road since 1965 and has been a member since, except for the six years he was a solo artist. Johnston has been on nearly every Beach Boys album since 1965’s Summer Days (And Summer Nights!!). In addition to Love and Johnston, The Beach Boys touring band consists of drummer/vocalist John Cowsill (The Cowsills), Guitarist/vocalist Jeffrey Foskett, who has also been a member of Wilson’s band and sings most of Brian’s falsetto vocals, musical director/lead guitarist/and vocalist Scott Totten who sings both Carl and Brian’s parts, bassist/vocalst Randell Kirsch who sings Jardine’s vocals, keyboardist/vocalist Tim Bonhomme, and saxophone/flute/percussionist Randy Leago. Also joining the band is Love’s son Christian (guitar/vocals), their newest member who also covers the Wilson brothers’ vocal parts. Part-time member for over 25 years and Full House star John Stamos performed as well for this show on vocals/percussion/guitar/drums.

Before The Beach Boys took the stage, a video montage highlighting various T.V. and live performances was shown. This 39 song set-list was kicked off with “Surfin’ Safari” and the hits kept coming with “Catch A Wave,” “Little Honda,” and on “Do It Again.” The band performed the new version from Love’s solo album “Unleash The Love,” which has Stamos and Sugar Ray vocalist Mark McGrath on the track. By song six, which was “Surfer Girl,” Stamos switched from guitar to drums and stayed behind the drum kit almost the whole show. On “You’re So Good To Me,” Johnston took the mic. On the following song, “Then I Kissed Her,” Cowsill took over for drumming duties as Stamos moved to percussion and Kirsch sang lead vocals.

Halfway through the first set, “All The Love In Paris,” from Unleash The Love, was performed. The humorous part of the show arrived just before “Be True To Your School,” with Love stating, “The song was inspired by people in uniforms. Cheerleading uniforms,” but the humour continued with an on-going gag that only happens when Stamos performs with the band. The joke Love makes is that 1963 is both the year Stamos was born and the year the song was released and joking about being Stamos’s father. The bit continues with some banter between Stamos and Love which leads into Love saying “to do a nice drum roll,” which turns into a drum solo which always gets the audience laughing after Love singing the first lyric of the song “When,” and Love holding that note. Another joke followed with Love saying, “There's some confusion to what we're gonna play next so we're going to take a 15-minute intermission now,” which was followed by Cowsill storming offstage in a hilarious fashion. For “Ballad of Ole Betsy,” Totten sang lead and always sings it so beautifully. Love once again joked about an intermission after the following song “Don’t Worry Baby,” “Next we’re going to do something interesting. Intermission. There’s Part 1 and Part 2.” However, set 1 continued with “Little Deuce Coupe.” Set 1 ended with “I Get Around,” which was 24 songs in and was followed by a real intermission.

Set 2 started off with The Beach Boys version of The Mamas and Papas “California Dreamin’.” This was definitely a night of nostalgia between all their music videos on the screen, archival concert footage, and vintage photos. This was one of those shows you not only know nearly every song but also all the lyrics. The songs continued with “Sloop John B.,” and “Wouldn’t It Be Nice,” followed by “California Girls,” and “Disney Girls,” back to back. To introduce Johnston for writing and singing “Disney Girls,” Love made a joke about Johnston for being the writer of the Barry Manilow hit “I Write the Songs,” and said, “Due to the length of that composition, we won't be able to do it, but you can head to Vegas to hear it done beautifully.” Johnston dedicated the song to the victims of the wildfires that occurred last year. “Forever” which was performed on Full House with Love, Johnston and Stamos was the next song. Love mentioned Uncle Jesse’s wedding on the show and how in real life Stamos got married, which was very recent. It was fitting that Stamos sang lead vocals. “God Only Knows,” which was always sang by Carl Wilson until his passing, was sang by Christian Love with footage and photos of Carl on the screens.

Three songs from Unleash The Love, starting with “Pisces Brothers,” were performed. This song was written by Love after the passing of George Harrison. Since Love had traveled with The Beatles to India, there was footage and photos of all of them together in 1968. Love followed with “Cool Head, Warm Heart,” and the title track. But before performing “Unleash The Love,” Love said, “What the World Needs Now Is Love,” referring to the Dionne Warwick song, was already taken.

For “Do Ya Wanna Dance,” Dennis Wilson was honored by his vocal track being used and footage of him performing in the 60’s was shown on the screens. Before the encore, “Help Me Rhonda,” “Barbara Ann,” and “Good Vibrations,” were performed. To close out the show, The Beach Boys played “Kokomo,” and “Fun Fun Fun,” and were joined by legendary producer Michael Lloyd. The Beach Boys tour continues through
mid-August with stops in the Midwest, East Coast, U.K., Ireland, and Canada. 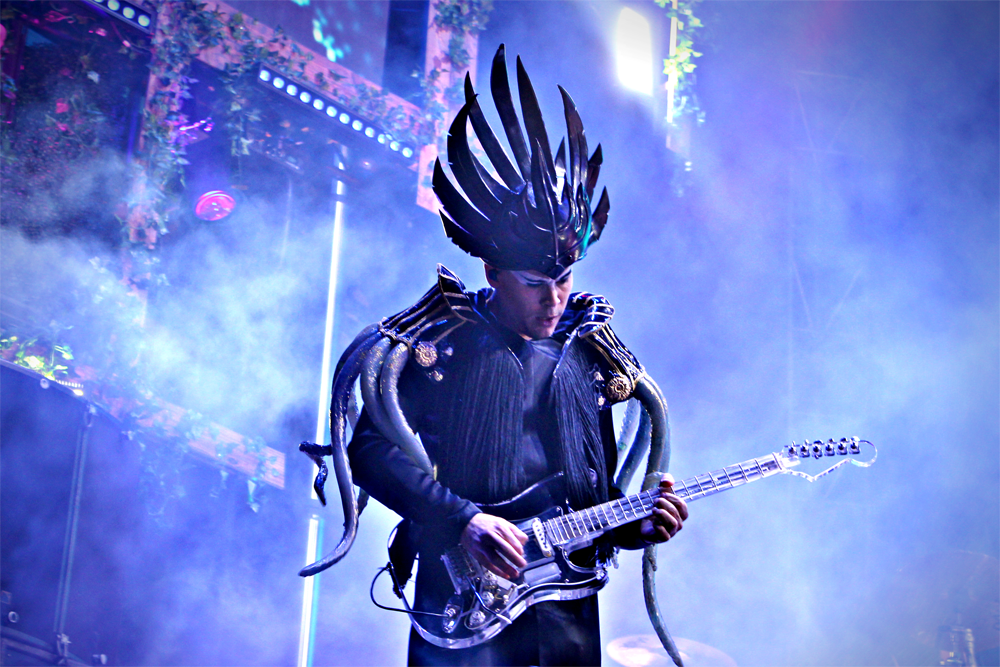