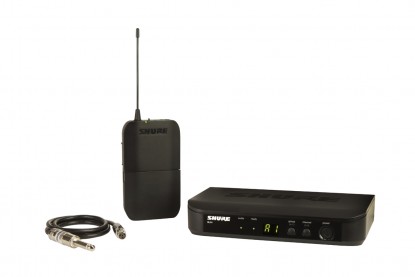 The BLX series is for musicians, singers and presenters who want the best in professional wireless products at an affordable price.  There are three receiver options including a half-rack size for installed applications.  All three have Shure’s one-touch QuickScan frequency scanning that quickly locates the best open frequency channel.

Other good things to know are the 300-foot performance range and up to 14 hours of battery life.  The transmitters come in body pack and handheld configurations with multiple handheld, lavaliere, instrument and headset microphone choices.

There is the BLX1 Body pack Transmitter with Tini QG® mini XLR connector for Shure’s lavaliere, headset, earset, and instrument microphones and guitar cables.  The BLX2 Handheld Transmitter has an integrated microphone capsule option with a -10 dB gain attenuation mode and your choice of Shure’s PG58, SM58® and Beta58A.

The BLX4 Single Channel Receiver also has QuickScan frequency selection with up to 12 simultaneously running systems per frequency band.  The BLX4R is the same system except it is half-rack size and has adjustable output level and removable antennas.