This summer, Western New York got a special treat with a headlining appearance from Lindsey Stirling at the Artpark Main Stage in Lewiston, New York. This was a rare stop, as Stirling has spent the majority of the summer touring alongside Evanescence as they continue to support their “Synthesis” album. I’ve been looking forward to seeing Lindsey Stirling perform for quite some time, so this was a highly anticipated show.

As fans packed the theater, the show was kicked off by The Federal Empire, a three-piece alternative outfit with an incredibly catchy EP titled “The American Dream.” Check out the tracks “Bad Habits” and “I Never Liked Your Friends,” both of which were featured during their set. After a brief intermission, Lindsey Stirling kicked off her set with “The Arena.” She began the set center stage, atop a riser, then descended onto the main stage after a short introduction. The first song was largely a solo performance, as Stirling danced from one end of the stage to the other. A troupe of additional dancers joined her on stage as she began “Moon Trance,” during which point she changed costumes into a one-piece skeleton suit. The stage was adorned by headstones include one depicting Piers Morgan. There was nothing political about it, rather, this was a friendly jab at Morgan for voting her off of America’s Got Talent in the quarterfinals back in 2010.

As Stirling began to perform “Shatter Me” from her 2014 album of the same name, the song began with a silhouette of a ballet dancer at center stage. Throughout the summer tour, Evanescence’s Amy Lee has been performing guest vocals on this song. Sadly, that wasn’t the case tonight as this show was a one-off headliner outside the tour.

Throughout the evening, Stirling drew on a balanced mix of songs from her three studio albums, as well as a performance of “Carol of the Bells” from 2017’s “Warmer in the Winter” album. Prior to this, Stirling announced that she would be returning to the area this coming December for a holiday concert to benefit the local Children’s Hospital. While the show hasn’t officially been announced, the crowed received this news with an abundance of cheers and applause. 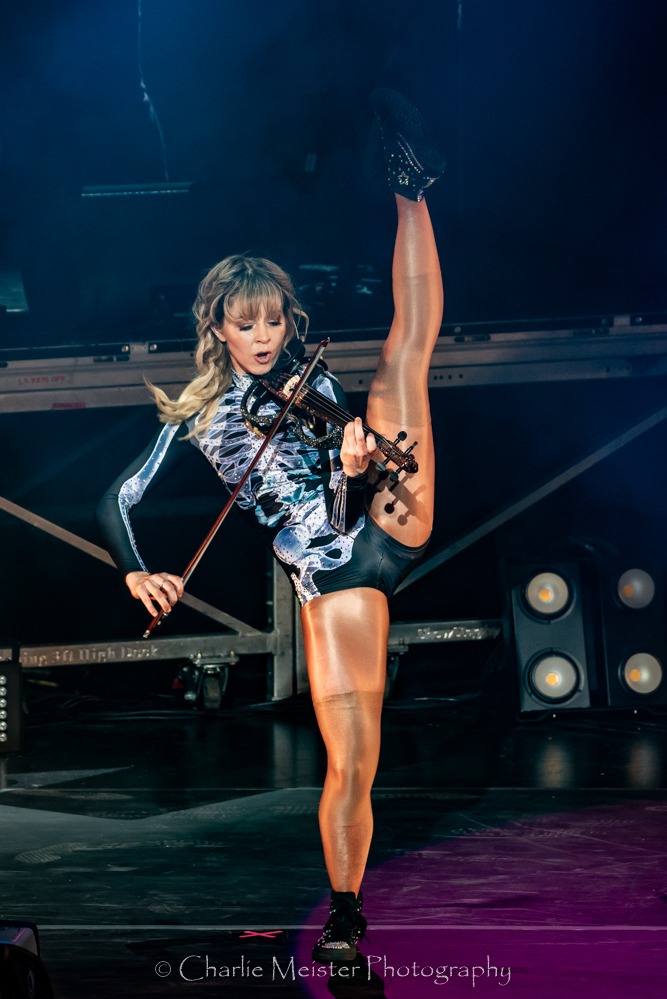 Additional highlights included a wildly entertaining rendition of “Roundtable Revival,” during which Stirling leapt from the riser and down onto the stage. About mid-set, Stirling took a moment to recognize her “gamer friends” in attendance. She credits the gamers for some of her early YouTube fame, due to her covers of classic video game soundtracks. She performed a medley of video game soundtracks to the backdrop of her videos including “The Legend of Zelda.” The evening’s finale included “Beyond the Veil” and a “Phantom of the Opera” medley that was equally as haunting as it was exciting.

After several years of trying to catch Lindsey Stirling in concert, I’m thrilled to report that her live performance was every bit as thrilling as I’d hoped it would be. You can still catch her this summer on tour with Evanescence for a bit longer. From the sounds of it, we should expect a winter tour announcement coming very shortly as well. Chromeo at the Hollywood Palladium in Los ...