CRSSD Festival took place this past weekend (Sept. 30th & Oct. 1st) in San Diego, CA whose attendance consisted of well dressed, hip 21+ music lovers. The weather was that of perfect SoCal temperature, never going much over 85 degrees all weekend and plenty of sunshine. The twice a year festival put on by FNGRS CRSSD is becoming a staple in the music festival scene. What makes this particular festival stand out is the laid back, friendly vibes you immediately feel when you walk into the beautiful palm tree surrounded Waterfront Park grounds. Could it be in part that the festival is 21+ only? I would say that is a large factor.

The festival consisted of 3 stages: Ocean View, The Palms, and City Steps, all bringing a unique sound and vibe to each location. Below are some of the weekend artist highlights broken out by stage:

The Palms: The Palms stage is hands down my favorite stage solely because of the beauty and uniqueness of the paper parasol umbrella roof that lay above fans as they dance below in bliss. Top artist sets here were: Bearson, Hotel Garuda, and Whethan.

City Steps: The City Steps stage known for its heavier beats and techno music influence, featured some stand out acts including: Richie Hawtin and Patrick Topping. Last but, not least, even though this was not an actual stage, I feel the notorious fountains at CRSSD deserve a shout out. There was something magical about these fountains located directly to the side of the Ocean View and The Palms stages and were lined with the happiest of fans barefoot in the water as they danced under the sun to their favorite songs in a state of pure euphoria. Unlike anything I've seen before at another festival.

We caught up with American electronic DJ, producer, composer, and engineer, Big Wild, who got called by CRSSD last minute to replace FKJ on the Ocean View stage on Sunday. Big Wild has
been making a splash in the electronic music scene since 2015 when he caught the attention of Seattle electronic duo, Odesza, who invited him on tour.

1. What originally got you into music and producing?

I really just got into hip-hop when I was in middle school, and just emulate a lot of the music I was listening to. Honestly it was pure chance that i stumbled upon this program online, and from there I was able to experiment and mess around. It didn't take long till I realized I really enjoyed it, and from there it's one of the few things I stuck with and worked on for a long time. 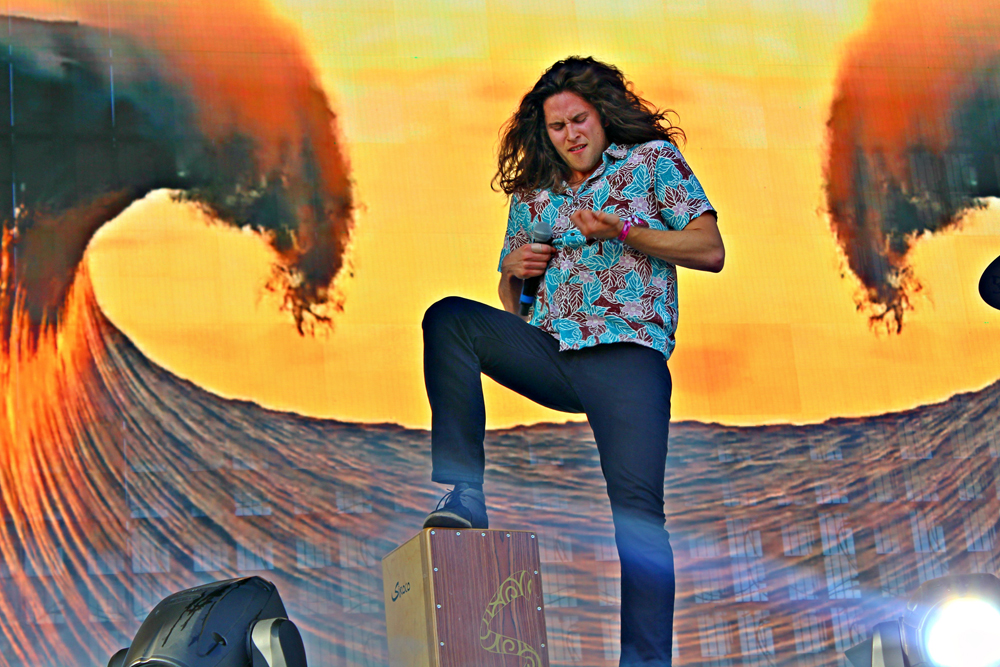 2. You play a lot of instruments, what is your favorite one to play when performing?

Yeah I play keys, drums, sing, whistle, all kinds of stuff. Drums would have to be my favorite to perform live, but I've been working on my singing a lot and that's starting to be something I'm very passionate about.

It was kind of inspired by my first trip to California. I went to Big Sur, and I'm from Massachusetts, so it was being somewhere completely different, being inspired by the surroundings and everything and it just inspired me to make a music project based around being adventurous and different with my sound. That's kind of how the name came up, I don't know why those two words came up, but they did.

4. How was the whole experience getting called by CRSSD last minute to step in and play Sunday?

It was pretty hectic, because I had a show at Red Rocks in Colorado last night (Saturday) so I was planning to fly out, do the show and have a relaxing day the next day and come back out. It was going to be a very chill weekend, and then this came through, but it was a really good opportunity, so I was still like yeah lets do it, but I didn't know until Thursday is when they told me about it, and we knew they were in a pinch and we felt like it was a good move to help them out.

5. Do you have a favorite song to perform? One that just gets you amped?

I've been really into this one I did a little edit of that's probably my favorite called Venice Ventures that I added this acapella over it. It's one of those songs everywhere I play, that all of the sudden all of this energy comes out and it's so cool, and a big part of why I do shows is to get people to dance and have a great time and thats one of those songs that does that no matter what, no matter where I play.

Oslo born DJ/producer, Bearson, helped kick off The Palms stage Saturday afternoon and has been touring this year all across the U.S. at various clubs and major festivals. The Norwegian electronic producer has built a solid fan base through a stream of unique remixes and original tracks including hit song, "Pink Medicine".

1. How was your experience playing CRSSD this year? Anything that sets this festival apart from others?

It was good, it was my second time playing the festival and third time attending.  There’s a reason I keep coming back…CRSSD has the feel of a local festival, really good vibes, and best of all the size is right, not too big and not too small, which allows you the ability to see all of the artists that you want to see on the lineup. 2.  How would you describe your sound?

That’s always a tough one…I would say electronic pop with influences from whatever else is inspiring me at the time.

3. Did you always know you wanted to do something in music growing up?

No, not really.  I thought that I was going to study economics but I was doing music pretty much full time throughout high school, without really thinking ahead but always making music a priority.  Then, after high school it sort of fell into my lap to be able to pursue music full time.  Right after high school, I told my parents that I would pursue music for one year and I ended up proving to them that I could make a living doing this. I moved to LA at this point and then here I am…

4. Where do you draw your inspiration from?

5. What would your dream collaboration be?

As of right now, the dream collaboration would be to make something with Kevin Parker of Tame Impala and Pharrell.